We have been exploring measurement this week during Math Centers! In kindergarten we start learning to measure using non-standard measurement, which basically means measuring something using anything but a ruler (cubes, paperclips, our feet). Only after we get really good at that do we start talking about using a ruler. We'll be exploring measurement all year long since this is a major kindergarten Common Core standard. Here's what we did this week!

We started off using Unifix cubes to measure pictures of school supply items (which I found here for free), and recording our answers. 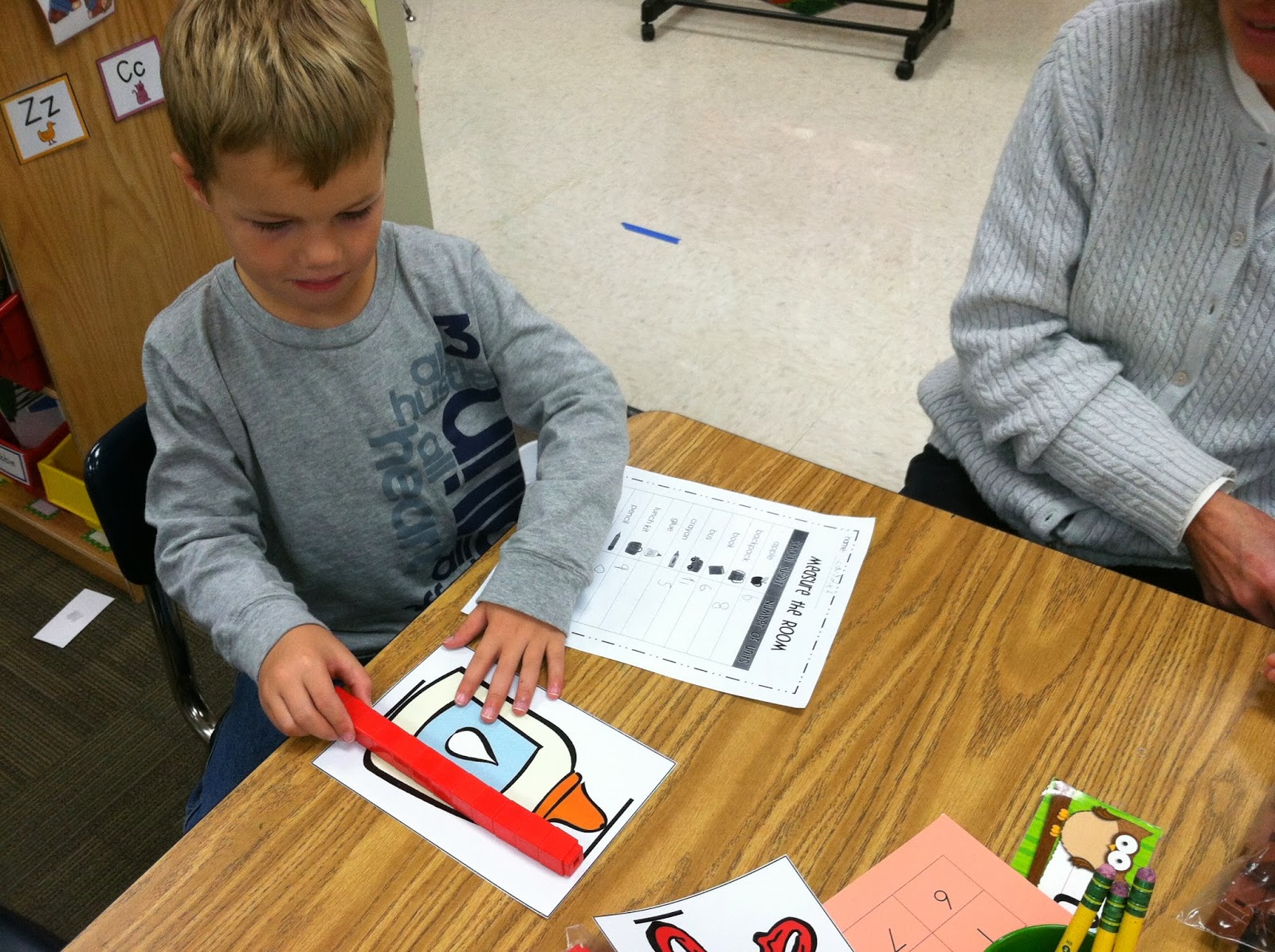 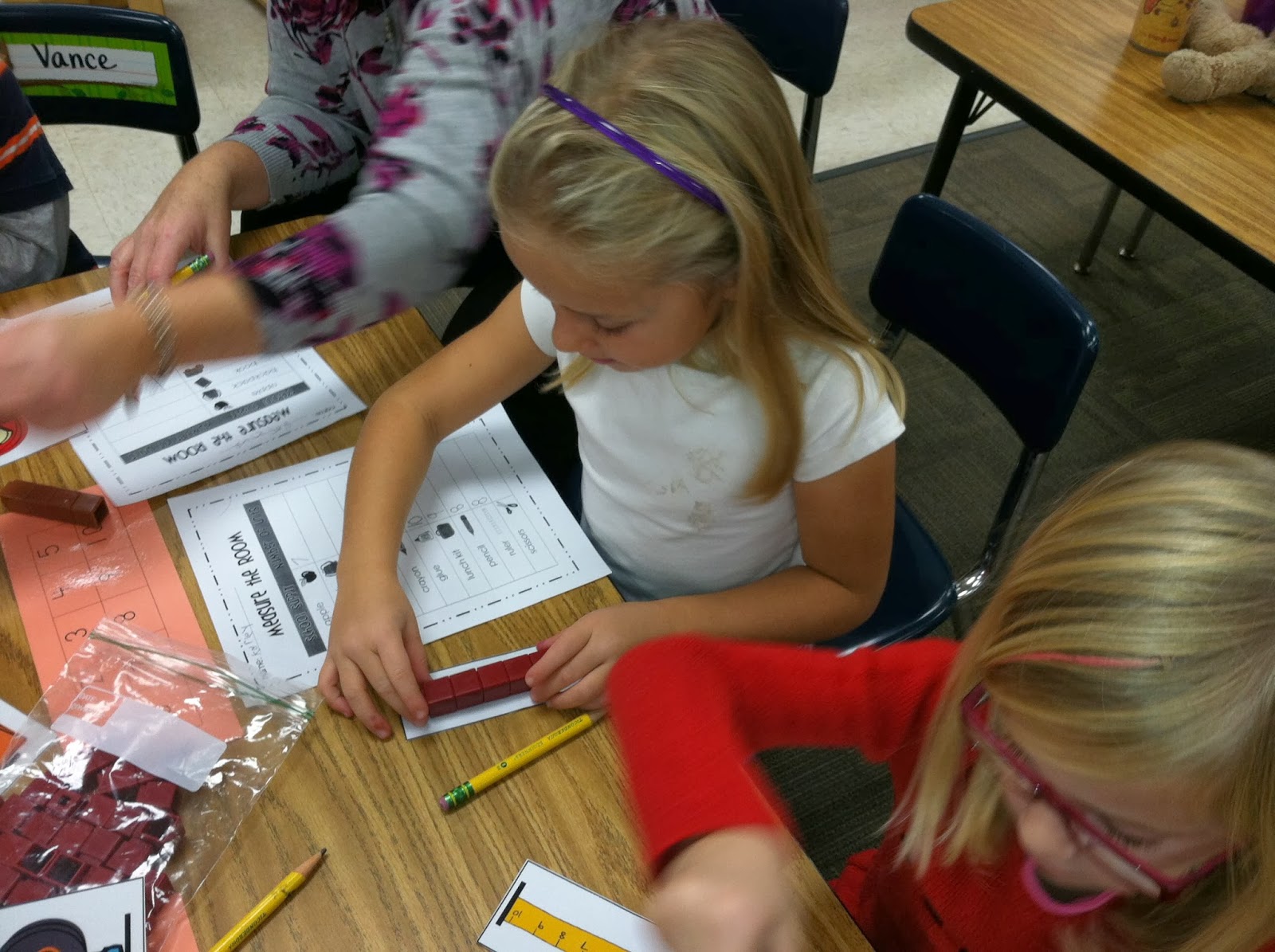 Then we worked with our high school tutors to measure large items around the room using our hands. Teamwork! (In case I haven't mentioned it to parents, we are very lucky to have two high school tutors come to our classroom for almost an hour each day during Math Centers. They each run a math center and are a HUGE help!) 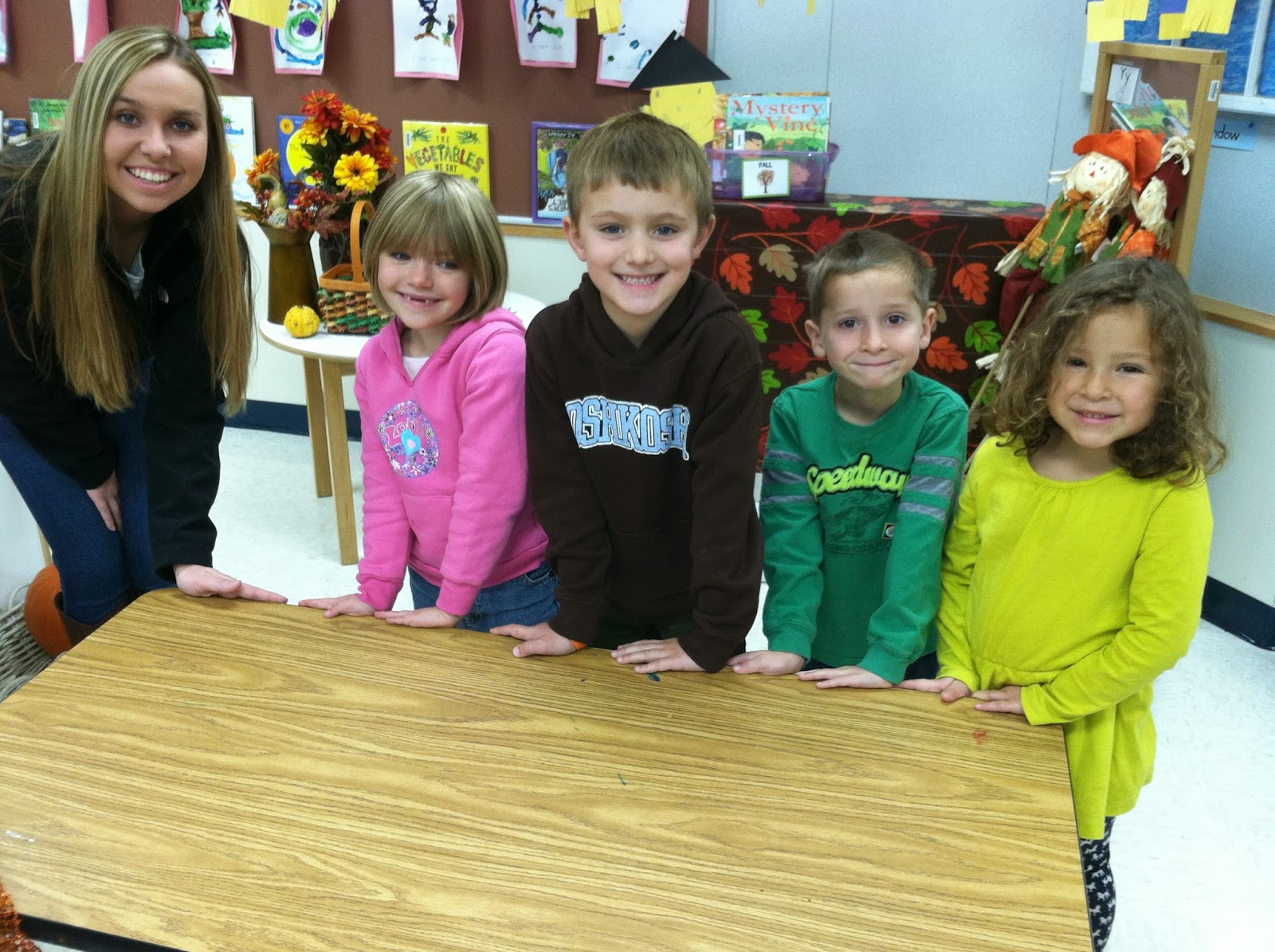 After I introduced them to a standard ruler, we went around the room finding objects that were bigger and smaller than our rulers. 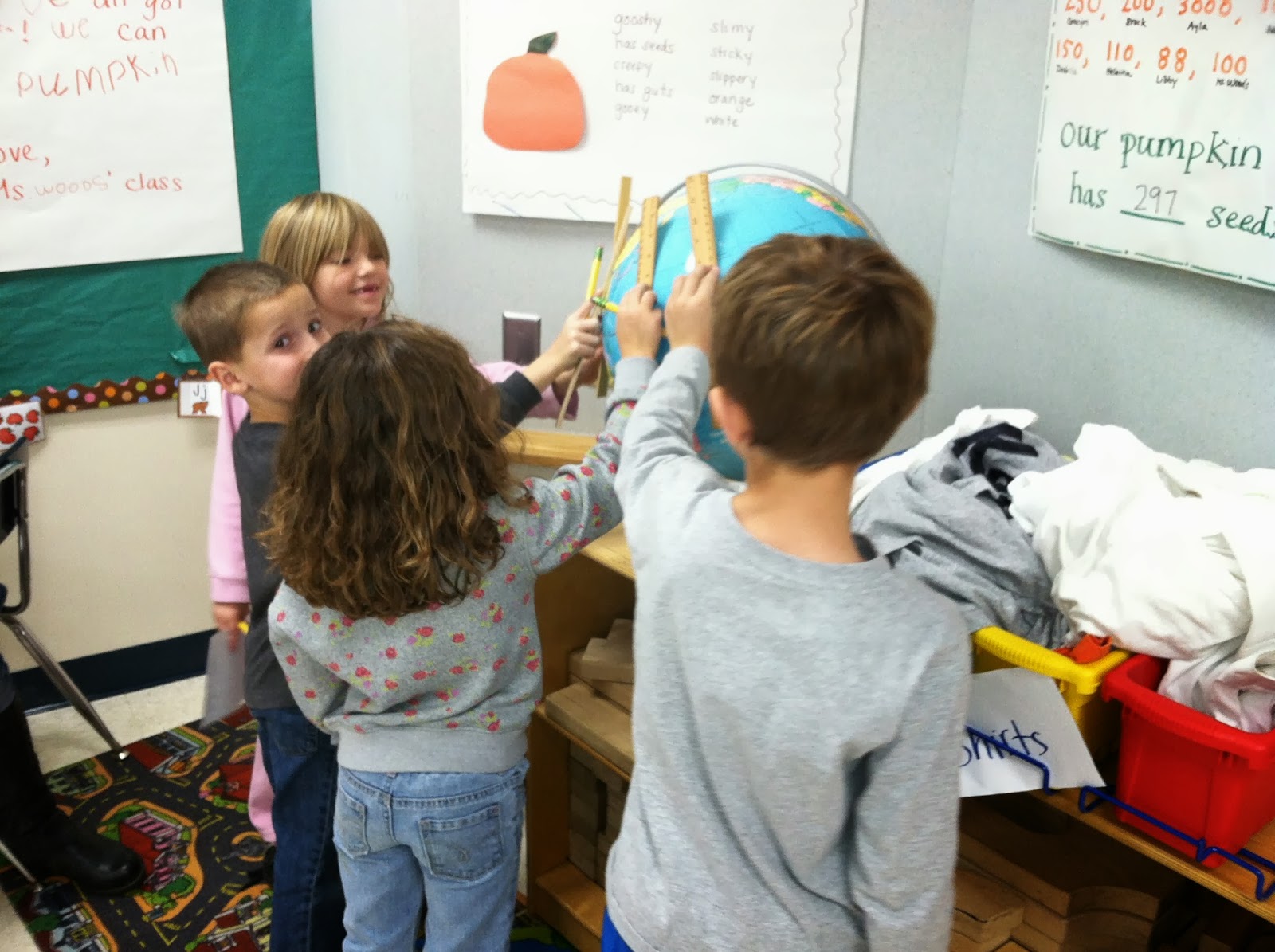 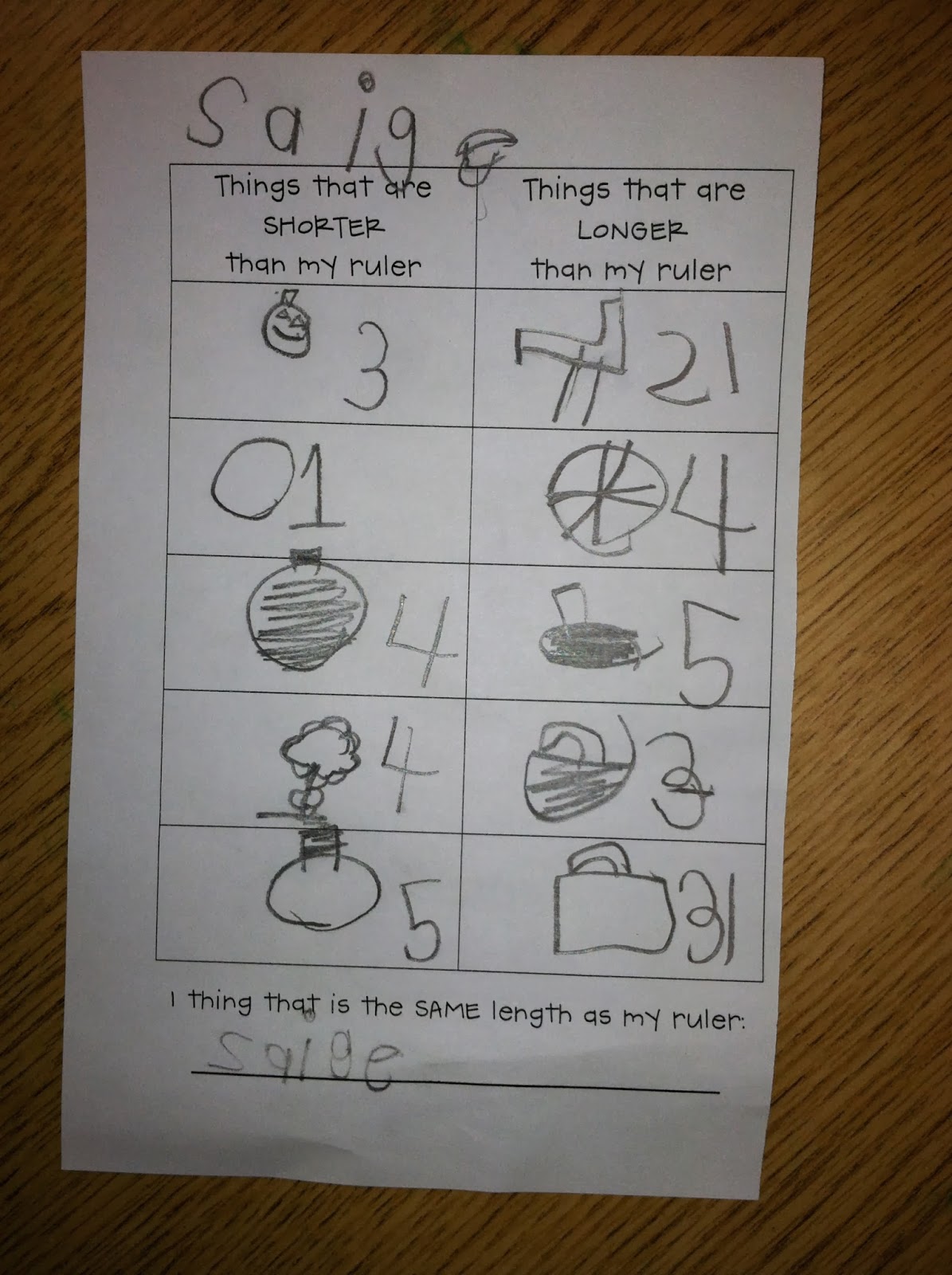 When the kids met with me for math journals, we played Top It (which is basically another name for the card game "War") using these cards. Working in pairs, the kindergarteners took turns flipping over a card. The cards could have either a number or a quantity on them.  Whoever had a bigger amount on their card got to keep them both! This was a great way for me to assess each student's number sense. For example, I could see who was able to recognize a group of three without having to use their finger to count each one (called one-to-one correspondence). For others, this was great practice getting better at one-to-one correspondence. I could also see who automatically knew which number was bigger than the other (another kindergarten skill to master). 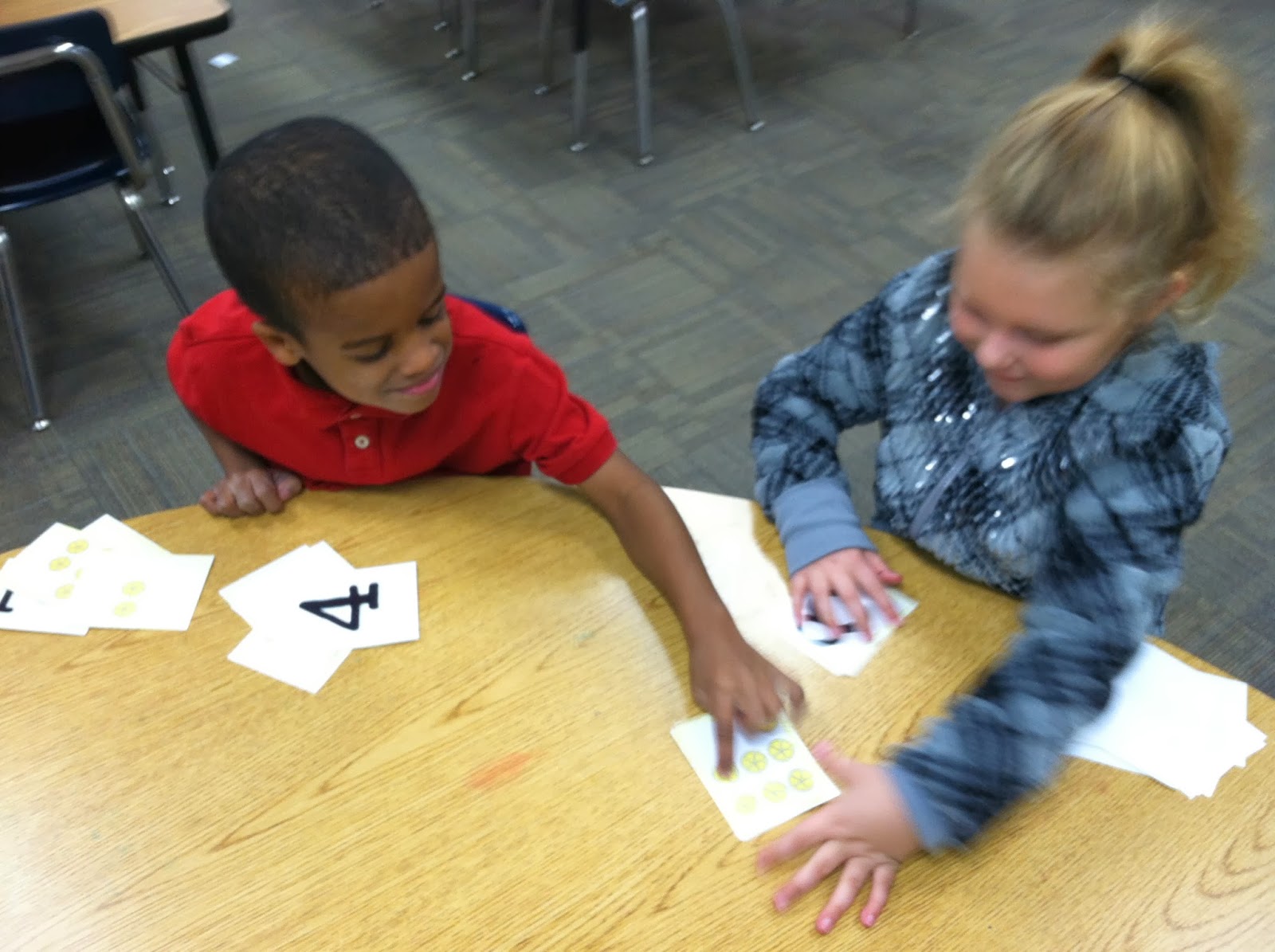 I forgot to get a picture of our final measurement activity...measuring ourselves! I will post a picture tomorrow, but basically we measured each other using yarn and then displayed our heights on the classroom door, along with a picture of each student. Our display is definitely getting a lot of attention in the school hallways! I have seen more than one fifth grader walking past on his knees to approximate the height of a kindergartener. :)

Next week in math we'll be focusing on patterns!
Posted by Courtney at 3:49 PM