At this point in the year we have learned dozens of sight words, also known as high frequency words. These are very important words for kindergarteners to learn because they are the words that appear most frequently in children's literature. Knowing these words automatically helps kindergarteners (and all readers) fluently read books. If they don't need to stop and deliberate over these words, they can save their effort and brain space for dealing with new and unfamiliar words. Plus, sight words are often words that can't be sounded out phonetically (like "are," "have," and "there"), so memorizing them will help young readers immensely!

We work with sight words every day, but I'm always looking for more creative ways to practice them. Here is one idea that I've been meaning to try, and it turned out awesome! Each kindergartener was assigned a sight word to color and decorate. Then we took goofy pictures of the kids holding them up, and put them into a slideshow. Tomorrow I'll show the slideshow to the kids and have them read the words...I think they're going to love it as much as I do! I especially love all the personalities that came out from the simple direction "make a funny face."


Sight Words - slideshow
Posted by Courtney at 9:48 AM No comments:

What have we been up to in Literacy Workstations?

Literacy workstation activities change every week, so we have been learning and practicing in so many fun ways! Here are some highlights from the past two weeks:

1. At the ABC Workstation, we played a game called "Can You Build It?" which focuses on spelling the color words. These words appear in children's books quite often, so it's helpful to know them automatically! 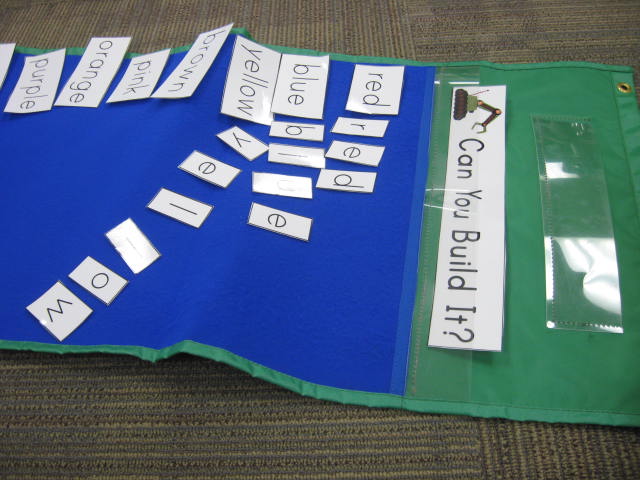 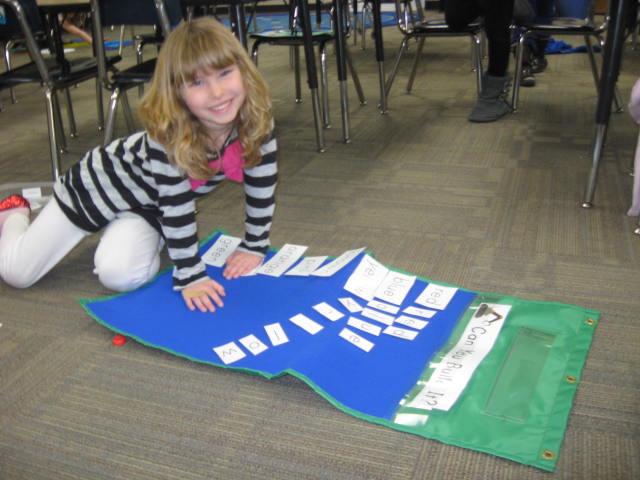 We have also been practicing our sight words in all sorts of ways. One favorite is using a spatula to flip over eggs that have sight words written on them. If your partner can read the word, he/she can keep the egg for breakfast! 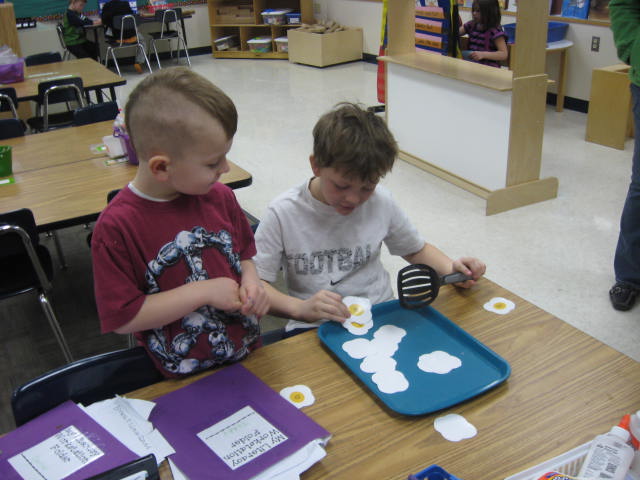 2. At the Pocket Chart Station, I wrote out the words to a song we had been singing called "Five Little Snowmen." One partner sings the song, while the other partner holds up pictures of the five little snowmen. When the sun comes out, one of the snowmen melts away! 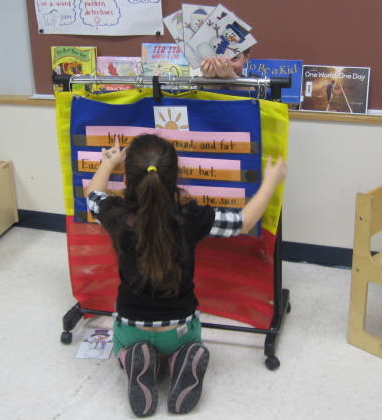 Another popular pocket chart game is called "Tic Tac Know." If you can read the sight word, you can place your X or O on top of it. Get three in a row and you win! 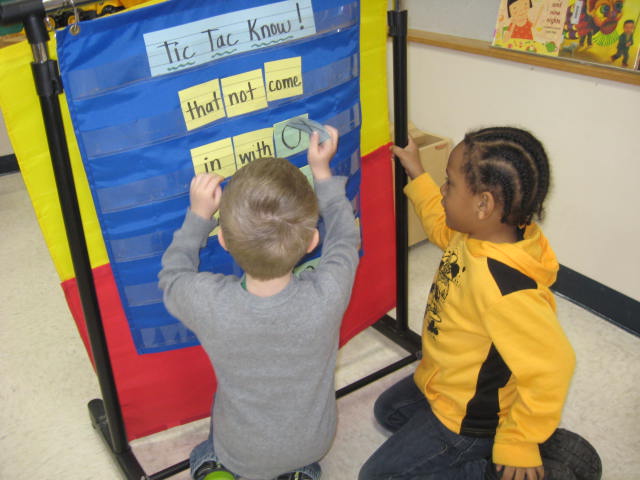 3. At the Big Book station, which is located at my teaching easel, the kindergarteners earned the privilege of using the big white board to play Build a Man! [There was SO much excitement in the room after I told them they could use the white board. I love kindergarten.] Build a Man is another name for Hangman, so one person thinks of a word, draws out the appropriate number of blank lines, and then takes letter guesses from their partner! 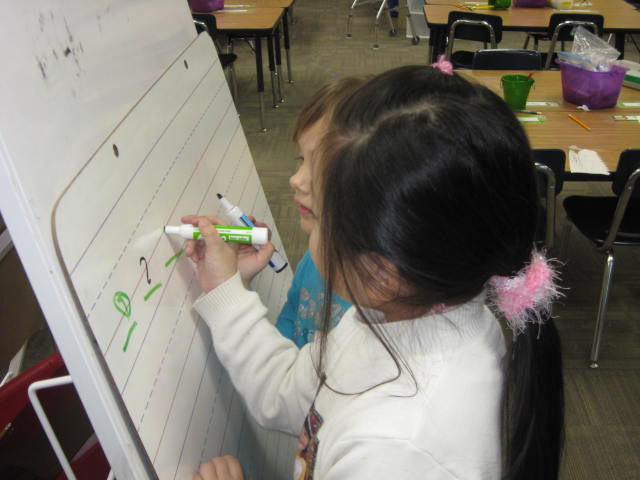 4. Of course there's the ever-popular SmartBoard station. We've begun playing literacy games from abcya.com, which has a ton of great reading, writing, and phonics games. This one helps you spell CVC words. [CVC words are short words that consist of a consonant, a vowel, and another consonant - such as "bug," "cat," and "pot."] 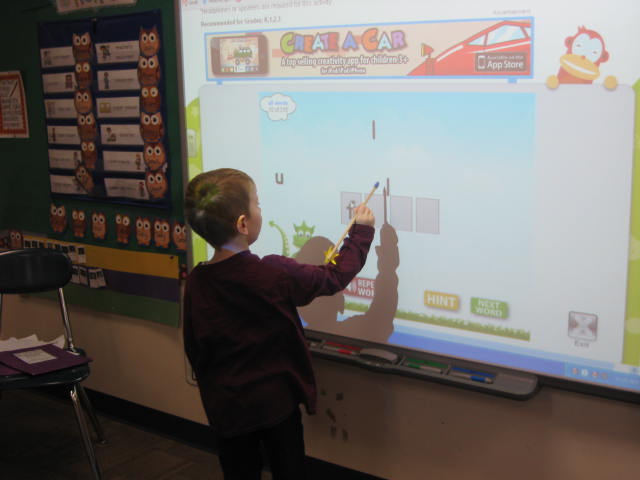 5. Here was one of our popular Science Stations. First we predicted how full a cup would be after putting in ONE HUNDRED DROPS of water. Then we got to actually pour that many drops in! Most of the kids estimated that the cups would be FULL of water. In actuality, after carefully counting out all one hundred drops, the results showed the cup to be about three centimeters full. This station combined science skills (prediction and observation) as well as math skills (counting and estimation). It was great! 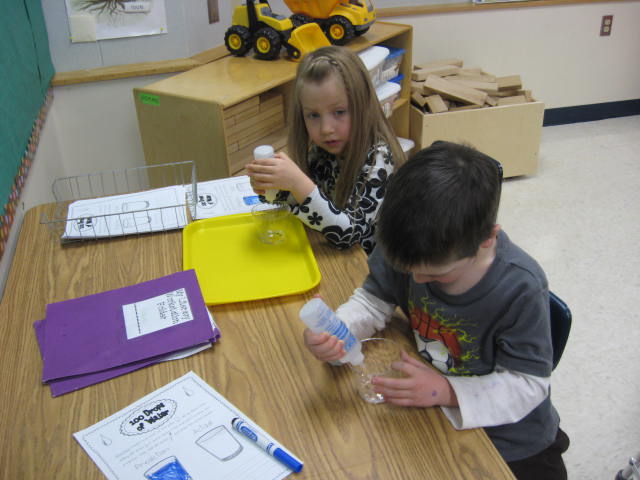 6. And of course we can't forget about the Puzzles and Games station! The kids pick these building sticks about 90% of the time at this station. Some things never lose their charm! Check out that 3-D shape... 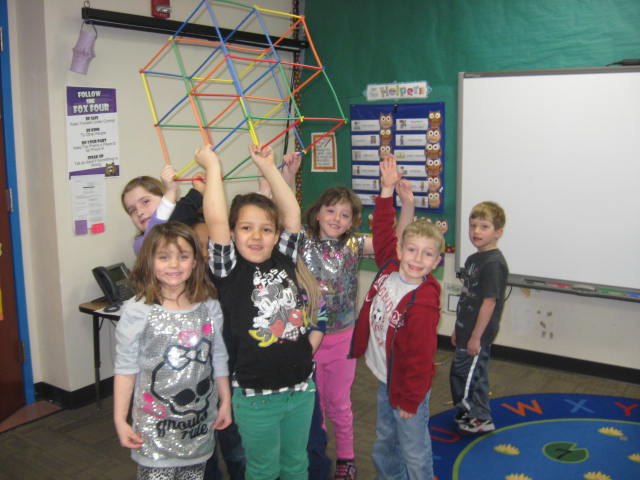 Posted by Courtney at 3:11 PM No comments: