One thing that's often overlooked in kindergarten with the push for more and more academic rigor is time for pretend play! Kindergarteners learn so much from role playing and interacting with their peers. (Teachers also learn a lot about how their students are developing when they observe these social interactions.) It's easy with a few props to set up different pretend-play activities. The latest in our classroom is a farmers' market! We read several books about the market (my favorite is Market Day by Lois Ehlert because of the folk art illustrations) and then got started. Here are a few photos. The "farmers" wear sunglasses and take money from customers, who present them with the card of which vegetable or fruit they want to purchase. 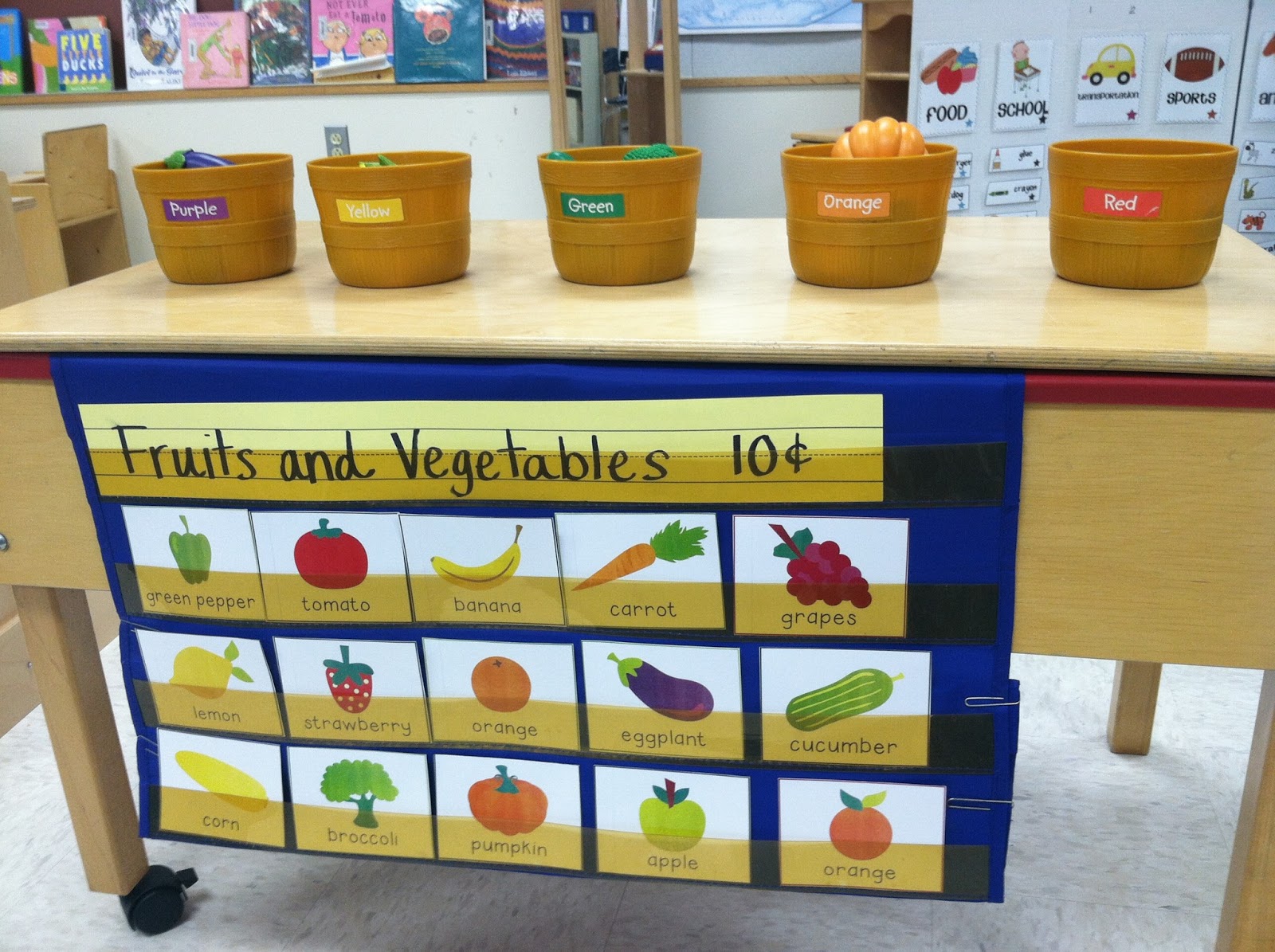 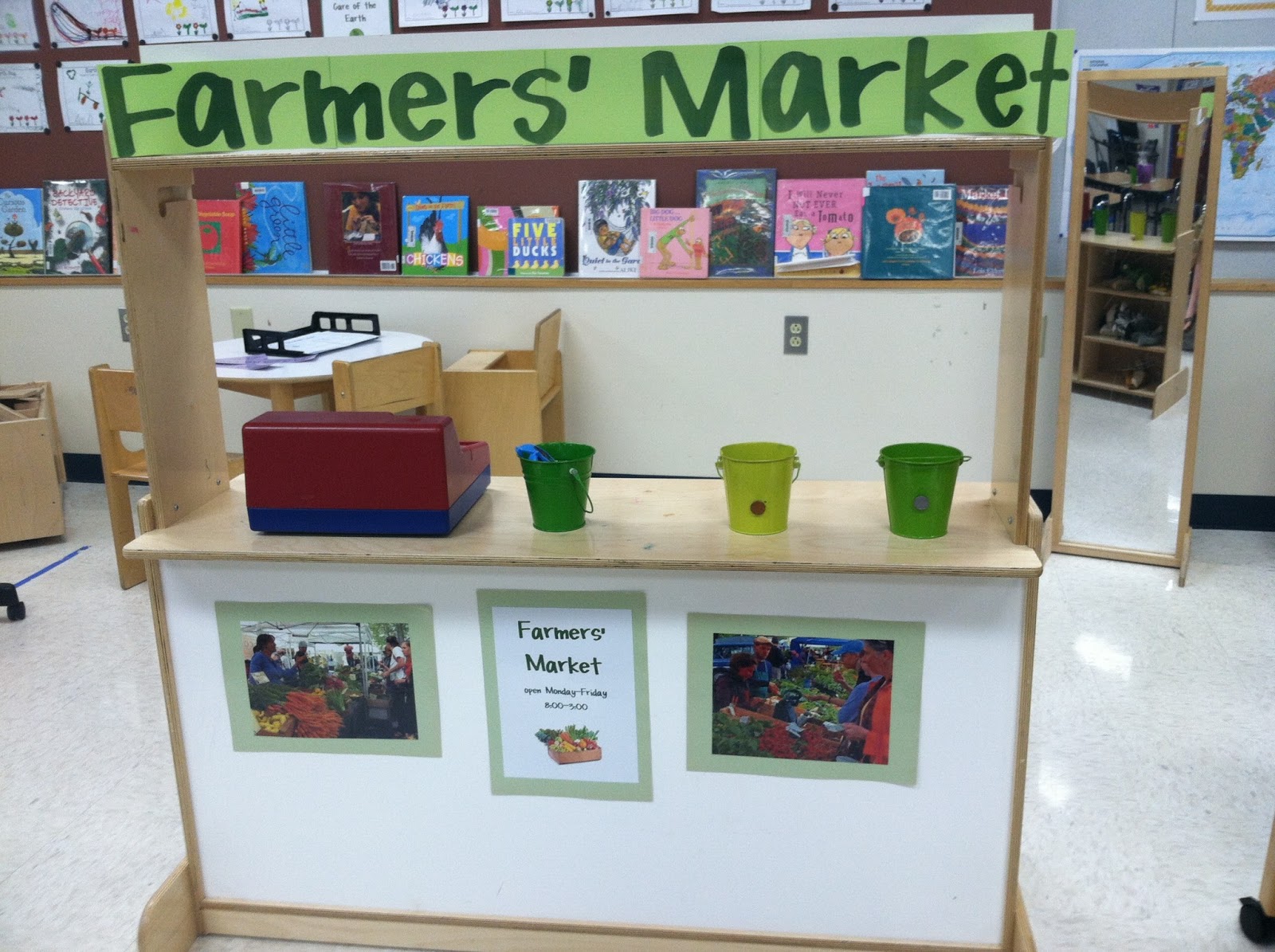 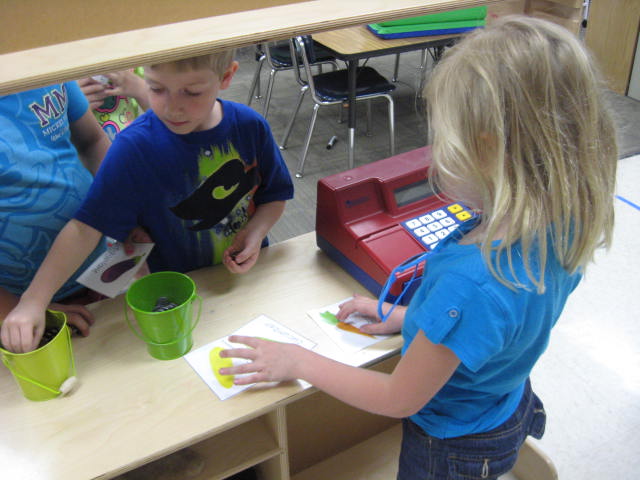 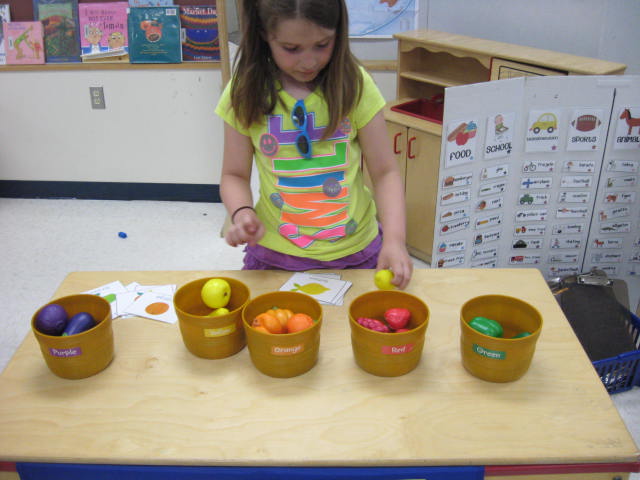 We also have a new worm compost in our classroom! After our worm unit and discussions on Earth Day about reusing and recycling, I really wanted to emphasize worms' ability to turn food waste into compost. The kids have started bringing in food scraps from home to give to the worms, but I had to nix that idea since toting banana peels to school probably isn't making a lot of parents happy. :) Here are some kindergarteners checking out the process of decomposition... 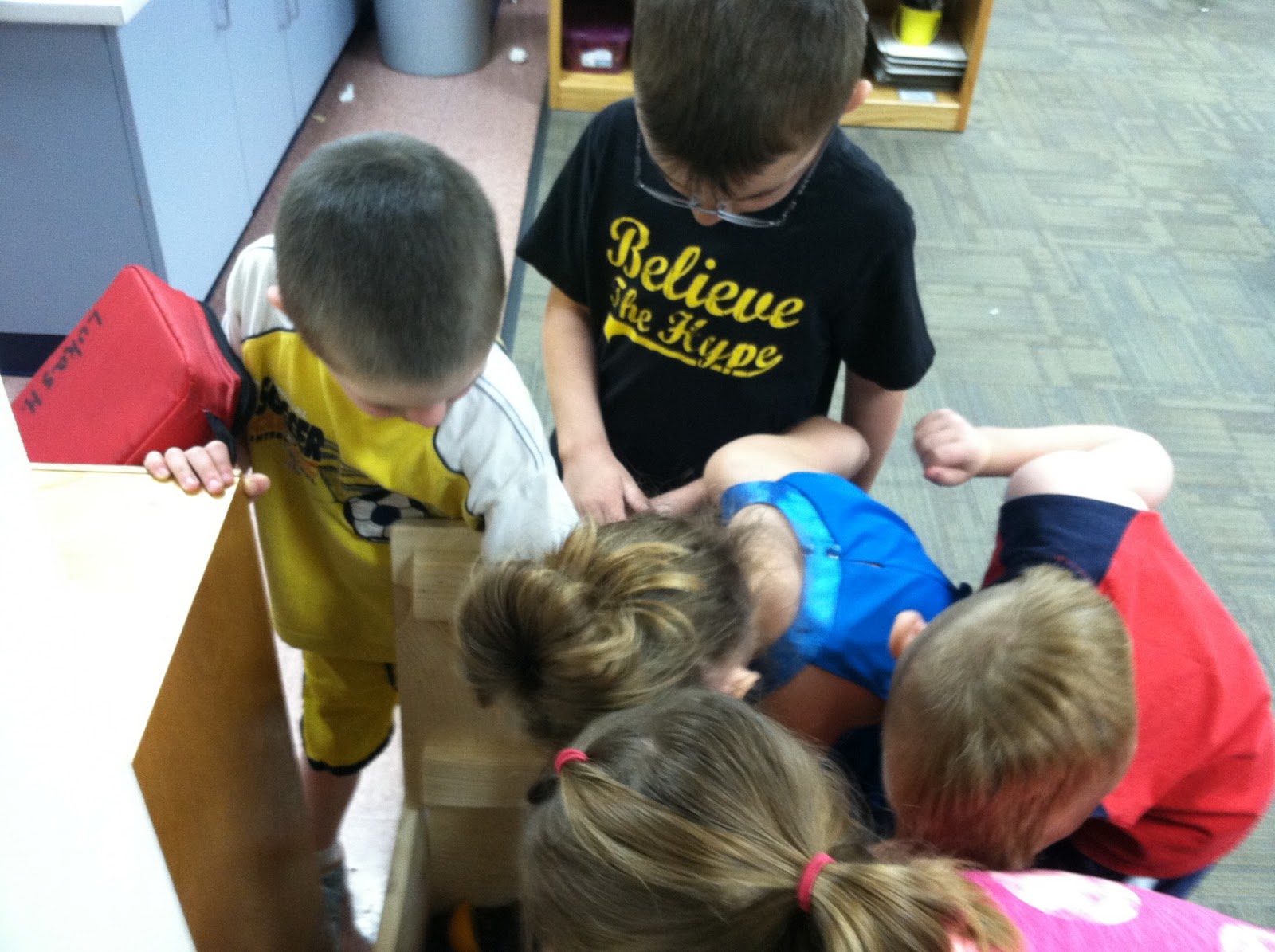 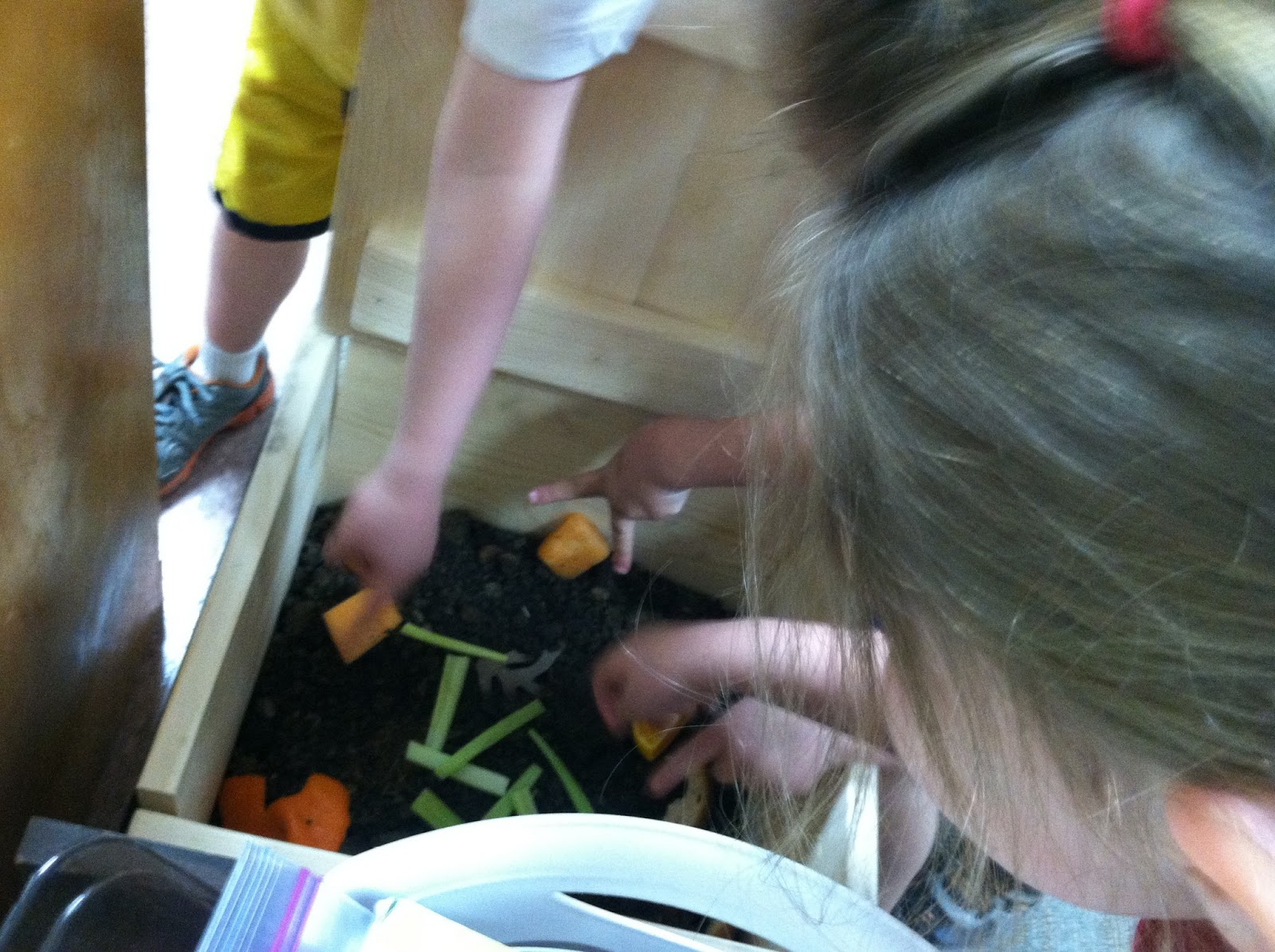 So much has happened in the two weeks since I last posted! I am constantly amazed at how much these little guys are learning and discovering on a daily basis. And now we are fast approaching the end of the year! I'll try to post more photos than normal since so much will be going on in the next three weeks. If any parents or family members would like copies of the pictures, please email me and I can send them your way!

Here are some photos from Beach Day, which we celebrated as a reward for good behavior. (The number one goal was for the whole class to come to the rug quickly, quietly, and safely every day...it was a challenge but we earned it!)

Here we are playing with the letter beach ball. When you catch the ball, your thumb will land on a letter, and you have to come up with a word that starts with that letter. 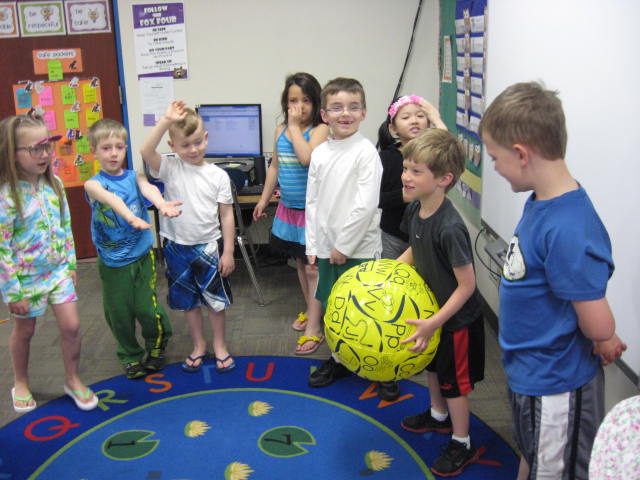 Some adorable beach gear. This day happened to be a freezing May day, after several days of warm weather. But it didn't worry us when we were inside! 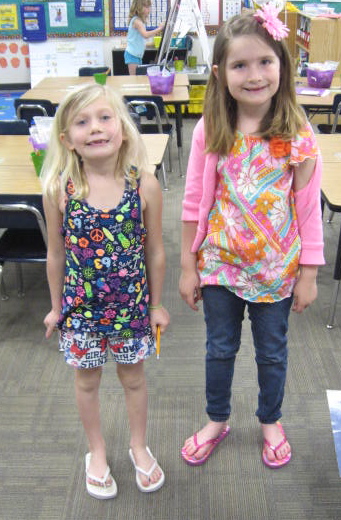 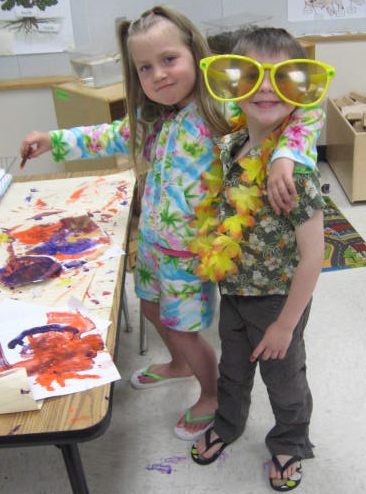 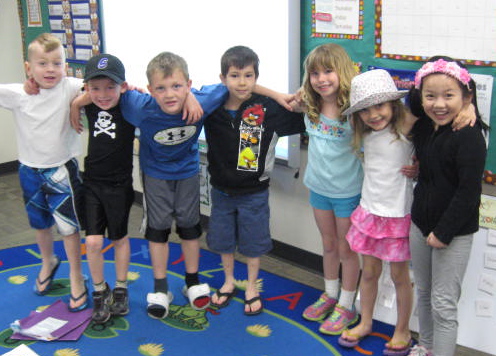 Here we are in our airline seats, on a "flight" to the beach. I was the pilot, and we were going to watch an in-flight movie called Finding Nemo. But don't forget that passengers on airplanes don't talk during the movie... 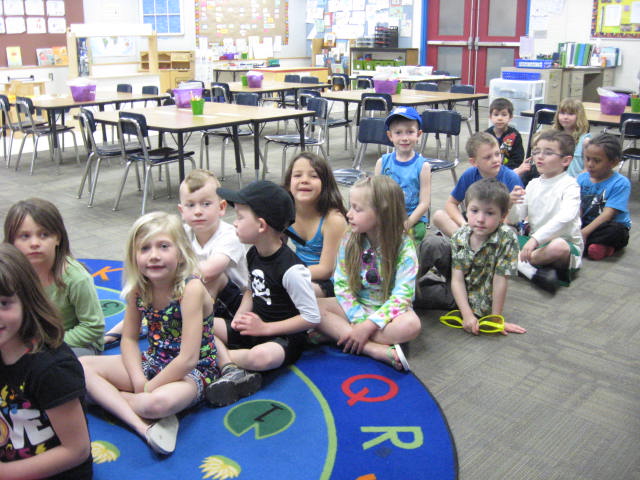 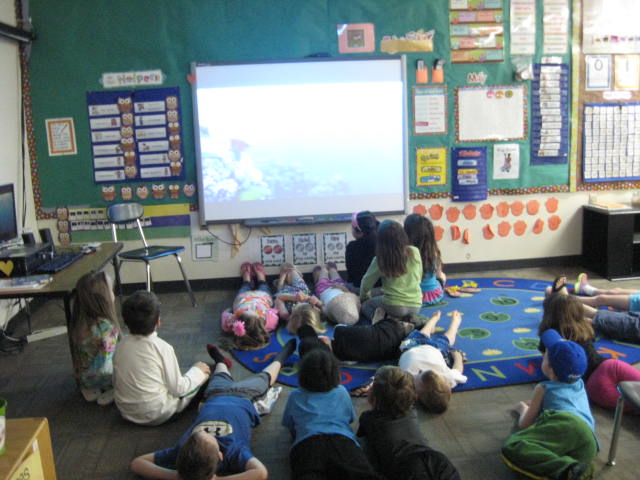 As part of our science curriculum, kindergarteners get to take care of baby chicks! Chickens eggs hatch after a 21-day cycle, and we received our eggs on day 18. So we kept them in an incubator and got to see them just hours after they hatched! As they grew we studied them and even got to touch them. Unfortunately we didn't have a lot of survivors (only three out of six hatched across the whole kindergarten grade) so we couldn't let all the kids hold each chick, because it would damage them. So Ms. Breuer, our resident chicken expert, let us pet its downy feathers as we asked questions and took notes. 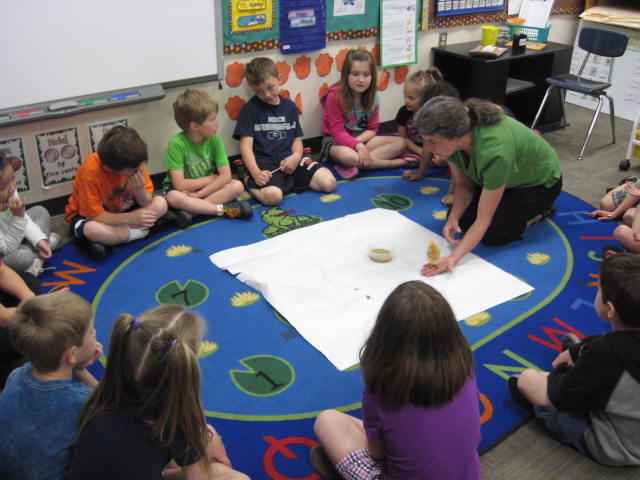 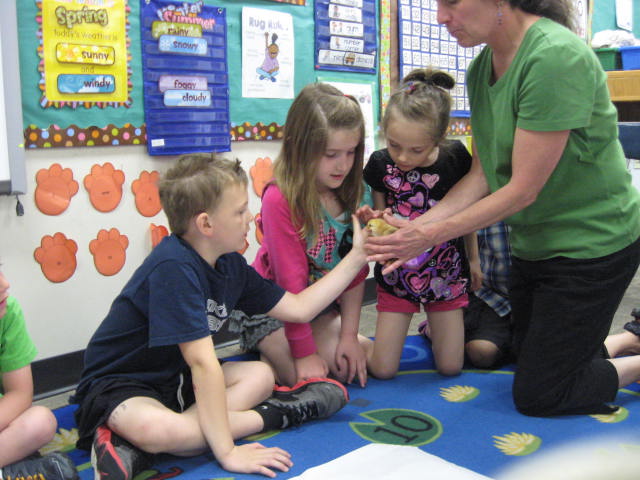 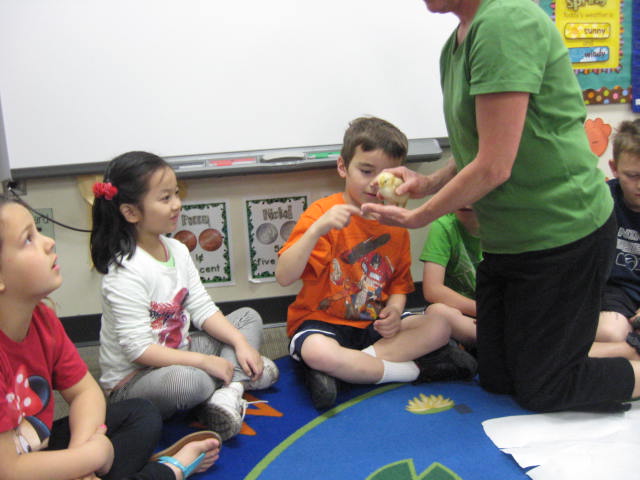 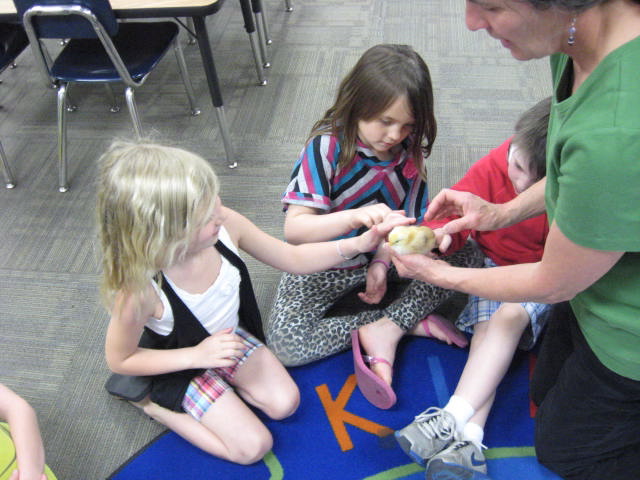 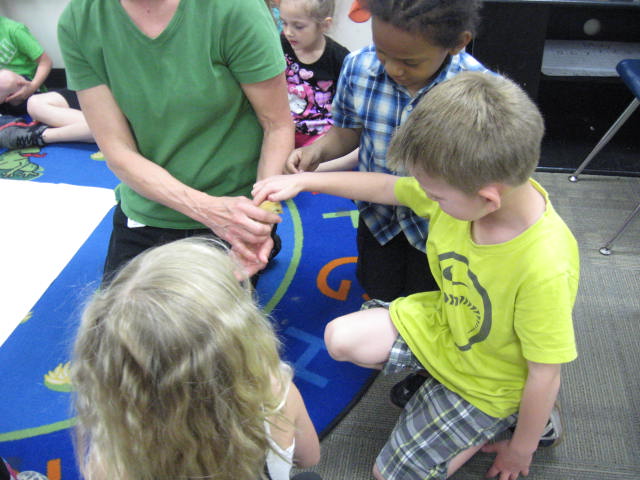 We used our science journals to take notes on what the eggs looked like, and then when the chicks hatched we also sketched them and took more notes. The notes the kids took on the chicks cracked me up. Keep in mind that the only directions I gave them were "Draw what you see, and make sure you label what you know." I'm not sure how they all ended up labeling the poop. 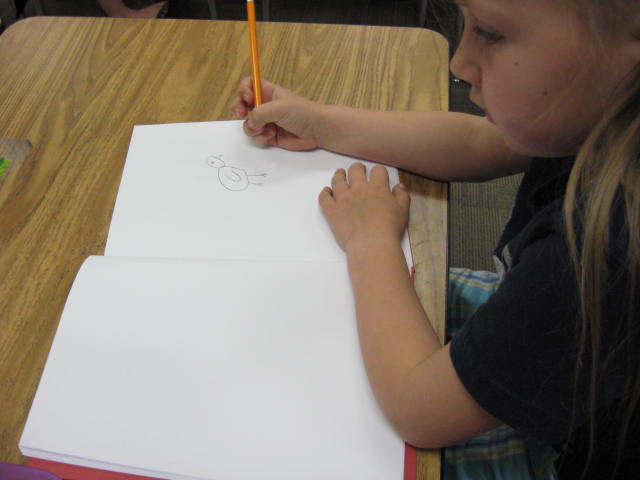 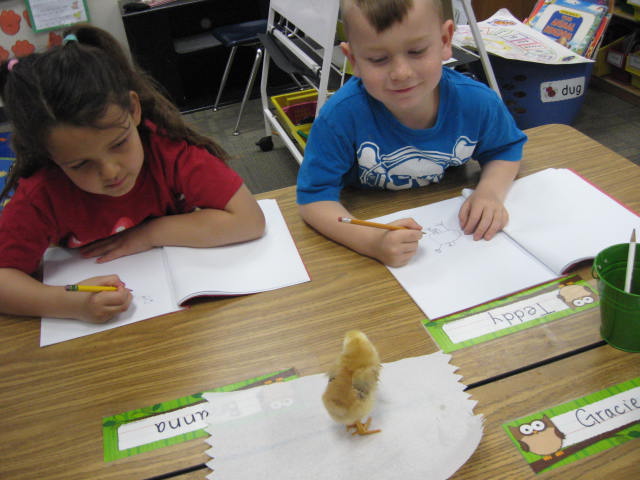 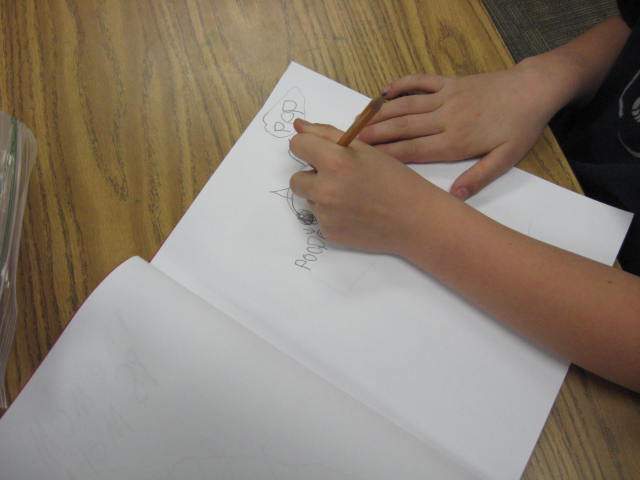 This next one is actually a talk bubble coming out of the chick's mouth, saying "peep." Guess we need to work a little bit more on our vowel sounds... 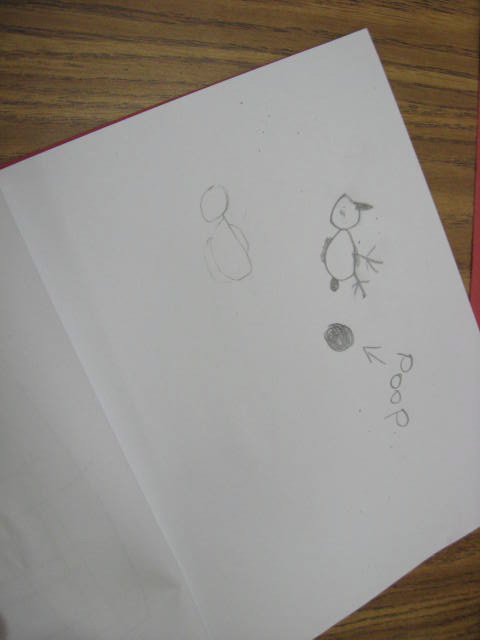 I meant to take note of what this says, but all I can decipher is "the feathers omein..." 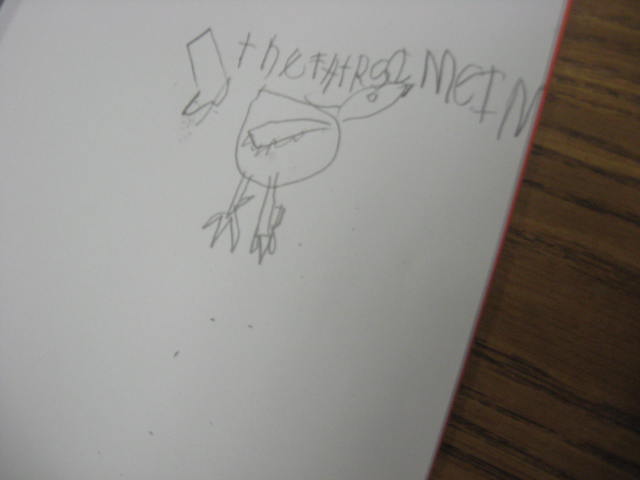 And I just had to add this picture, even though it's unrelated, because it's so cute. They worked so hard on this United States puzzle and are so proud. 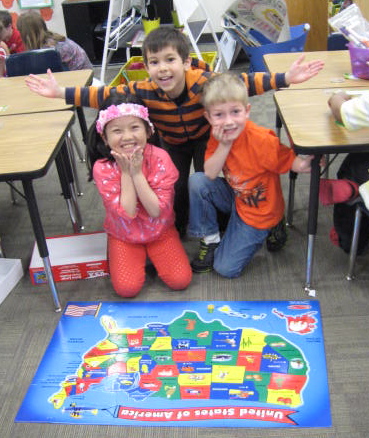 Posted by Courtney at 8:28 PM No comments:

Now that we are close to the end of the year (I can't believe it!), we are practicing some tougher math concepts to help us get ready for first grade. One of the Common Core math standards for all kindergarteners to master by the end of the year is the following:

For any number from 1 to 9, find the number that makes 10 when
added to the given number, e.g., by using objects or drawings, and
record the answer with a drawing or equation.

In this activity, I rolled a ten-sided dice and called out the number. They picked one color of paint and made that many dots on their ten-frame (a ten-frame looks like this and gets filled in with the appropriate amount of dots to represent a number). For example, if I rolled a 3, they would yell out "3!" and make 3 purple dots. Then they switched colors and made the remaining dots in the new color. For example, they would make 7 green dots. Then we would say the number sentence that goes with it, e.g. "3 and 7 make 10." 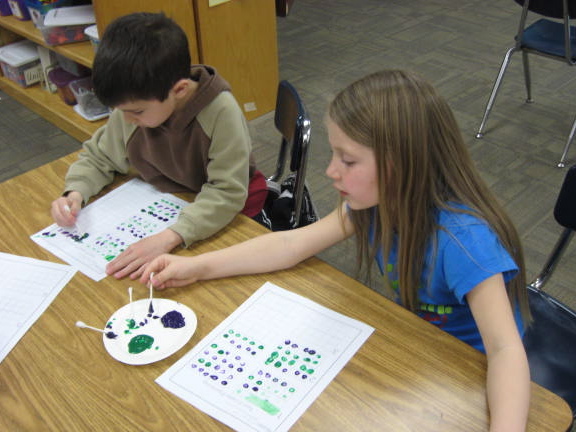 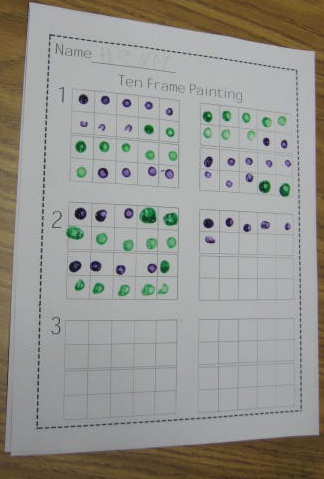 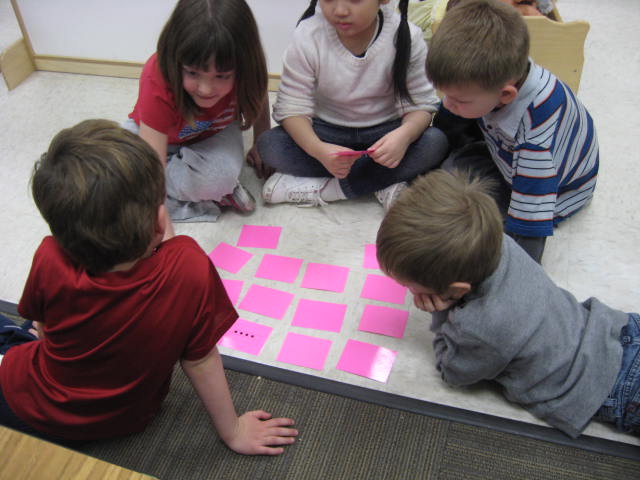 Make 10 Hide & Seek
This was a really fun one. I handed out a ten-frame to each person and they had to find their partner in the group (for example, someone with a 3 card would look for someone with a 7 card). Then one partner got to hide their card somewhere in the room while the other person closed their eyes, and then went to find it. Who knew math could incorporate Hide & Seek (the favorite game of every six-year-old everywhere)??

Make 10 Scavenger Hunt
I don't have any pictures from this one, but I hid number cards throughout the school and they were each in charge of finding their Make 10 match somewhere in the hallways! This was exciting but also an exercise in self-control, since getting 18 kindergarteners to resist running down the hallway screaming "Where is a 7??" is quite a challenge.

Make 10 Rainbow
Our culminating activity was making this rainbow of sums to ten. If you haven't spent much time in a kindergarten classroom, you might not know the extent to which they LOVE rainbows. They are completely fascinated by them. So anything I can do to incorporate rainbows into learning will automatically make it more interesting for them. Here are our Make 10 Rainbows! (The cloud on the left is connected to a cloud on the right, and the two numbers written inside add up to ten.) 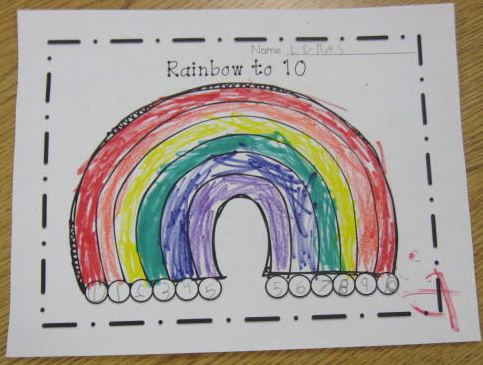 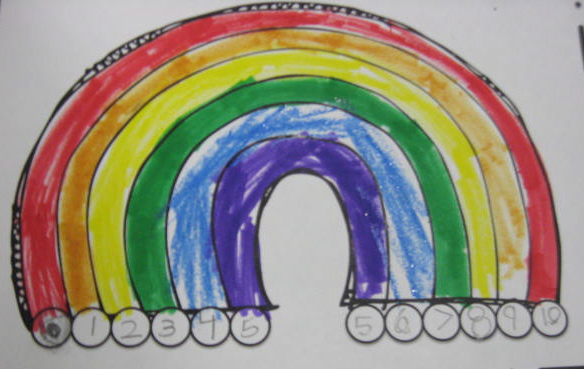 Posted by Courtney at 1:20 PM No comments: